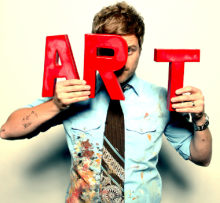 Scott Erickson is a working studio artist who has been exhibited in galleries throughout the Seattle area, Atlanta, and Central California.  He is also an experiential artist – bringing the making of art into public spaces.  Scott has collaborated with a number of non-profits, such as WorldVision and International Justice Mission, using his art skills for advocacy and fund-raising.  He has also worked with a number of musicians and has been on two nation-wide tours making art in live concert settings.   Scott recently finished a three year Artist In Residency with Ecclesia Church in Houston, TX, in which he spent his time curating a visual culture within the church community.  He currently lives with his wife Holly and his kids Anders and Elsa in Tacoma, WA where Scott is the Creative Communications Lead at WorldVision ACT:S.