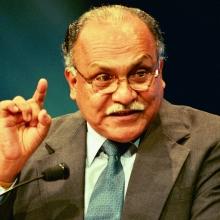 Peruvian missiologist and missionary to the US and Spain

Samuel Escobar Aguirre was born in Arequipa, Perú. He served as the General Director of InterVarsity Christian Fellowship in Canada from 1972-1975. Accompanied by his wife Lilly, he served on staff with the International Fellowship of Evangelical Students (IFES) in Latin America for 26 years, and he currently holds the honorary role of president of IFES.

He is an ordained Baptist minister and a distinguished writer. He graduated from San Marcos University in Lima and obtained a Ph.D. at Complutense University, Madrid, Spain. In 1997 he received an Honorary Doctor of Divinity degree from McMaster University in Hamilton, Canada. During the spring semester, he teaches at the Baptist Seminary of Madrid, and during the fall semester he teaches at both the Eastern Baptist Theological Seminary and Eastern University in Pennsylvania.

In his free time, Samuel enjoys walking, swimming and watching movies. Samuel has spoken at four Urbana conventions (1970, 1973, 1981, and 1990). He is interested in student missions because of the key role that students play in mission history and the existence of the church.