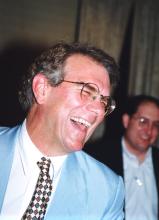 Robert A. Case is the founding Director of the World Journalism Institute. He is a past philosophy instructor at Central Washington University and a former news announcer at KBIQ/KGDN, Seattle and KFUO, St. Louis. He was the founding executive director for the Christian Action Council (now, CareNet or Pregnancy Care Center) in 1976 and the founding chairman of the Francis Schaeffer Institute Board of Advisors in l992. Case was appointed to the Board of Trustees of Central Washington University in l980 by the last Republican governor in Washington State, John Spellman, and to the National Council on Vocational Education by President Ronald Reagan in l987. In 1990, he was appointed to the board of directors of God’s World Publications. He and his wife, Kathy, were the cofounders of the Covenant College Parent Council. Case currently serves on the alumni board of his University of Washington fraternity – Alpha Delta Phi.

Bob has written numerous books reviews and articles for Christianity Today, Presbyterian Journal, Presbyterion, Journal of the Evangelical Theological Society and other publications. He has also written several monographs on the intersection of Christianity and journalism and an occasional blog entitled “robertcaseinpoint.com” in which he deals with Christianity, journalism and the American Songbook. You can contact him at bcase@worldji.com.