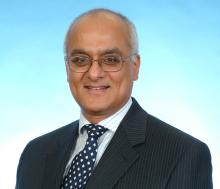 Ram Gidoomal CBE is a successful businessman and entrepreneur who over the last twenty years has used his business acumen to support the work of numerous public and charitable organisations and global and local missions.

In 2011 he was appointed Chairman of Traidcraft (www.traidcraft.co.uk )and the Lausanne Movement International Board (www.lausanne.org ). In addition, Ram’s other current roles include Chair of the Office of the Independent Adjudicator for Higher Education for England and Wales; South Asian Concern (www.southasianconcern.org ); Allia the social profit society (www.allia.org.uk and www.futurebusiness.co.uk )

He is a Board member of the International Justice Mission (USA), a fellow of the Royal Society of Arts and a visiting Professor of Entrepreneurship at Middlesex University. Ram is also a freeman of the City of London, a liveryman of the Worshipful Company of Information Technologists and a Companion of the Chartered Management Institute.

Past roles include UK Chief Executive of the Inlaks Group, Crown appointee to the Court and Council of Imperial College London and founder of the Christmas Cracker Charity which has raised over US$10million, engaged upwards of 50,000 young people in the process and mobilised many of them to world mission. He was a candidate for London Mayor for the Christian Peoples Alliance in 2000 and 2004 gaining nearly 100,000 votes in each election.

He has written several book including ‘Sari ‘n Chips’, ‘Chapatis for tea’, ‘Lions, Princesses and Gurus’, ‘The UK Maharajahs’, ‘The British and how to deal with them – Doing business with Britain’s ethnic minorities’ and ‘How would Jesus vote?’