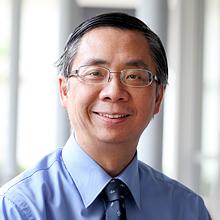 Patrick Fung believes the Word of God is indispensable to the revival, transformation, and mission of God’s people. At Urbana 15, he will exposit passages of Scripture from the Gospel of Matthew.

Patrick is the 10th director of OMF International (formerly the China Inland Mission) and is the first Asian to lead the ministry. During his time as a medical student in Sydney, Australia, Patrick came to faith in Christ. He was later admitted to the Royal College of Physicians in the United Kingdom and the Hong Kong Academy of Medicine, and served as a doctor in Hong Kong specializing in internal medicine. He went on to receive a diploma in Christian studies from the China Graduate School of Theology in Hong Kong and a master's degree in missiology from Fuller Theological Seminary.

In 1989, Patrick and his wife Jennie, a consultant gynecologist, joined OMF International and began working within the Muslim context. Patrick was appointed director of OMF Hong Kong in 1996. This role included mobilizing students and graduates for mission and training church congregations, particularly Chinese churches, for the role they can play. In 2001 Patrick was appointed OMF's international director for mobilization. Now, as director, Patrick provides spiritual leadership for OMF, which currently has more than 1,400 workers from over 25 countries serving among East Asia’s peoples.

Patrick was a plenary speaker at Urbana 09, and also spoke at the Cape Town 2010 Third Lausanne Congress on World Evangelization and served as one of the Keswick Bible Conference speakers in the United Kingdom in 2011. He is the author of two books: Live to Be Forgotten and Medical Missionaries of the China Inland Mission.