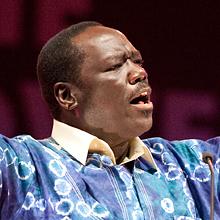 Oscar Muriu serves as the pastor of Nairobi Chapel in Kenya. Oscar’s desire is to see the African church rise up to its place and calling in the work of missions alongside its worldwide brothers, and to make its own unique contribution to the task of missions. He feels that his primary calling in life is to raise up a legacy of leaders, especially African leaders, for the church of Christ worldwide.

Oscar has been the pastor of Nairobi Chapel, a thriving, missions-focused congregation, since January 1991. Nairobi Chapel is one of Kenya’s most influential churches, which, at this writing, has spawned dozens of church plants. Nairobi Chapel serves the poor in surrounding communities through numerous ministries that include medical clinics and an HIV-AIDS ministry, Beacon of Hope. In addition, Nairobi Chapel has developed a ministry that houses and educates young at-risk girls who live on the streets of Nairobi.

Oscar holds degrees from the University of Delhi (India) and Nairobi Evangelical Graduate School of Theology. He is a dynamic speaker and pastor who has ministered in many countries throughout Africa and globally. Oscar is married to Beatrice Wambui, who serves as the Children’s Pastor at Nairobi Chapel. Together they have four daughters.