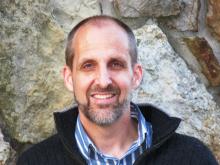 Mike and his family spent 22 years in France, North Africa and the Middle East, working among Muslims and Christians – learning how the gospel is impacting Islamic communities.  He was deported from a Middle Eastern country and blacklisted in 2005.  He returned to the US where he served for 6 years as a pastor in Knoxville, Tennessee.

In the aftermath of 9/11 and wars in Iraq and Afghanistan, Mike sensed that Christian rhetoric among US Christians regarding Muslims was often a poor reflection of the gospel. He began to speak and write as an advocate for a “Kingdom vision” of the Muslim world. He wrote a book titled “Fresh Vision for the Muslim World” to give voice to his convictions.

Currently, Mike is working with a theological education ministry in Beirut, Lebanon. Having graduate degrees in theology and Arabic Language and Literature, he is now pursuing a PhD in Muslim-Christian relations during the 11th century, in hopes that it might inform the church today.

He is married to Stephanie and they have 3 daughters, two sons-in-law and three grandsons! In his free time, Mike enjoys playing guitar and banjo.