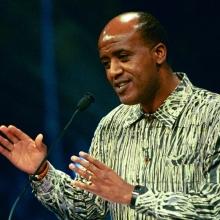 Joshua was raised, lived, studied and worked in Kenya. He initially trained as a veterinary surgeon and did research for seven years, which also included study for a Masters degree at the University of Edinburgh, United Kingdom. He is interested in the development of Africa, and he has studied Economic Development (MBA) at Eastern University in Pennsylvania.

He is now starting a sabbatical to study development at the London School of Economics and Political Science (LSE). In 1995, Joshua served as the Chief Administrative Officer for the International Fellowship of Evangelical Students (IFES) responsible for the leadership of the International Office based in Oxford, England. In 1999, he became the Associate General Secretary of IFES. Joshua is married to Gladys and they have two boys, Wathanga and Wahome.