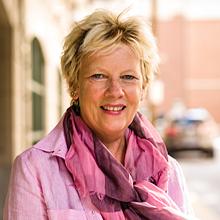 Evelyne Reisacher cares deeply about sharing the gospel cross-culturally. She is passionate about exploring gender issues in Islam, Muslim-Christian relations, and world religions.

Evelyne is currently an associate professor of Islamic studies and intercultural relationships at Fuller Theological Seminary. Previously, she worked at an organization called L’Ami for 20 years in France, facilitating the relationship between churches and North African immigrants and developing courses, teaching tools, and seminars for sharing the gospel cross-culturally. She’s trained Christian leaders and church members in Europe, North Africa, the Middle East, Southeast Asia, and the United States.

Evelyne has published several articles on gender issues in Islam and Muslim-Christian relations. She is the general editor of Toward Respectful Understanding and Witness among Muslims: Festschrift in Honor of J. Dudley Woodberry (2012), and the associate editor of From the Straight Path to the Narrow Way: Journeys of Faith (2006). Additionally, Reisacher has published chapters in the books Peace-Building by, between, and beyond Muslims and Evangelical Christians (2009) and A Worldview Approach to Ministry Among Muslim Women (2007).