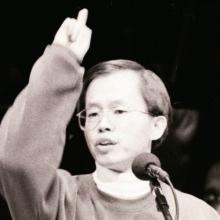 Like Daniel of the Bible, Daniel Oh is a person deeply affected and shaped by the discipline of prayer.As a student at Talbot School of Theology more than a decade ago, Daniel was introduced by a professor to the power of intercessory prayer.

Through hours of intercession for the world, God instilled in his heart a passion for missions overseas. That conviction has never wavered. Today he is a missionary with OC International (formerly Overseas Crusades) and lives in Yogyakarta, Indonesia with his wife and four children. He teaches at the Evangelical Theological Seminary of Indonesia, discipling and equipping people to plant churches in homes and villages.

Daniel, a significant missions teacher and leader in the Korean-American church, will be the Urbana 96 Prayer Leader. He will introduce students to the discipline of daily prayer and lead them to intercessory prayer during the general sessions. He will also co-lead the Concert of Prayer with Mac Pier, Concerts of Prayer® International's Director of Urban Strategy for Prayer and Revival.