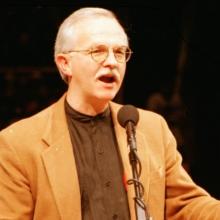 Urbana 96 will be Dan Harrison's third convention as Director. Dan is deeply committed to this generation of students. There is nothing that energizes him more than seeing young people challenged, mobilized and equipped to love others and spread the Gospel of Jesus Christ to the ends of the earth.

He refuses to accept the notion that so-called "Generation X" is lazy, self-absorbed and aimless. His is convinced that students, given the proper direction and encouragement, can and will do great things for God. And he counts it a privilege to direct and influence a convention that serves young people in that way.

Born to missionary parents in China, Dan is loaned to InterVarsity by Wycliffe Bible Translators. He served for 25 years with Wycliffe in Papua New Guinea and as part of the senior leadership in their Dallas office. Dan currently serves as Vice President of InterVarsity - USA and Director of InterVarsity Missions. He and his wife have four children.