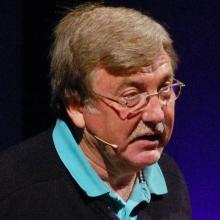 Lindsay Brown was converted to Christ as a teenager and studied European history in Oxford for 3 years, where he was President of the Christian Union.

He has been involved in student ministry with IFES since 1981 and served as General Secretary from 1991-2007. He has been secunded part time to the Lausanne Movement since 2008 and spends the rest of his time running the IFES-FEUER (Fellowship of Evangelists in the Universities of Europe) network which seeks to stimulate the public communication of the gospel in universities across Europe. He is convinced of the strategic importance of student work for the continuing health and strength of the worldwide church.

It was at university that he developed his foundational convictions, including a strong commitment to the importance of Scripture and expository preaching, and the recognition that personal testimony, specific prayer, and clear presentation of the gospel formed a powerful and effective combination in evangelism.

Lindsay also serves as the International Director for the Lausanne Movement and is the author of ‘Shining like Stars’ – a collection of student stories from the 20th century. He also has a doctorate from the Caribbean Graduate School of Theology in Jamaica.

In his spare time he enjoys walking on the hills and beaches of Wales and watching all ball sports. He is married to Ann, with one son, Owen.