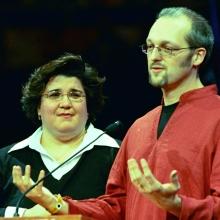 Born in Southern California, Jon is the eldest of seven children. When Jon was three years old, his missionary father moved his family to Afghanistan, where they lived for seven years before returning to the United States.

Jon graduated from Harvey Mudd College with a degree in Math and Computer Science. He has been working with college students for 12 years. He and his wife, Jen, serve with InterVarsity in Los Angeles, California. He currently trains staff and students in Bible study and prayer.