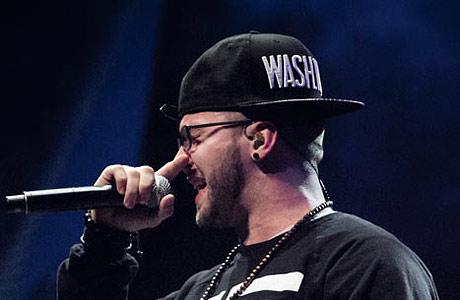 “Their turf. Her neighborhood. His table. Your block. My city.” This is where hip-hop artist Andy Mineo believes the ministry of every Christ follower needs to happen. These are not just words to Mineo, not some far-off philosophy. No, this reality penetrates every area of his life.

Growing up in New York, Mineo came to realize he was looking for someone to come and meet him on his level.

“I had a friend who I started going to church with. Looking back,” recalls Mineo, “I went because of the community and welcome I experienced there. A couple older guys were father-figures to me and loved me by getting involved with my life.”

Once at the City College of New York (CCNY), Mineo grew deeply in his faith and, at this same time, began to cross paths with other students who were grappling with what it meant to follow Jesus. Some of these students were involved with InterVarsity Christian Fellowship.

Once he heard about InterVarsity’s vision to reach the campus with the gospel of Jesus Christ by creating witnessing communities of students and faculty, he was sold. “I realized that my vision for the campus was the same as theirs so I was like ‘Let’s get together!’”

During his junior year at CCNY, Mineo traveled to St. Louis to take part in Urbana 09. The conference was grounded in the Gospel of John, specifically how Jesus came and dwelled with us. This theme connected with a passion that was already stirring in Mineo’s heart, both in the areas of intentional living and music.

As Mineo lived out the vision Christ has given InterVarsity, after graduation he continued to have the desire for authentic community to be formed. He wanted to mirror how Jesus lived among people in a specific place.

After graduating in the Spring of 2011, Mineo and some friends decided to move into Washington Heights in New York City and plant a church whose structure is based in forming genuine relationships with their neighbors.

“I knew of churches [who had] good teaching but would not be a welcoming place or a community that just anyone could be part of. I live on a block where everyone deals drugs and I could not invite them just anywhere. We had a vision of a church, with solid teaching, set into the surrounding culture,” said Mineo.

This vision led Mineo to dig roots deep into the Washington Heights community. This is where, unless Christ calls him elsewhere, Mineo plans remain for the rest of his life.

Jesus has not only influenced how Mineo plans to be present in his neighborhood, but also how he creates hip-hop music. Mineo’s passion for hip-hop began around age ten, when he and his friends would parody hit songs. That passion has only grown since then. “Hip-hop is transcultural. It is the fastest growing genre of music worldwide and it can be used to communicate so much in such a short amount of time.”

Mineo feels called by the Lord to be a light in the hip-hop world and believes that he has to enter this musical world as he can. “He has found a way to meet people on their level, in their life with his music and that really stands out,” says Dre Garcia, friend of and DJ for Mineo.

“I want to be a voice in hip-hop; a voice that is recognized and respected for the art I create. That is what the mainstream cats care about. They do not care about some guy being popular among Christians. They care about record sales, money flow and the art that is created. I want to meet them on their turf,” shared Mineo.

The Allure of More

Entering into the hip-hop world has not been clean and perfect for Mineo. “With my music and name starting to spread, I find myself being seduced by the allure of more. It is intoxicating,” Mineo confessed. It has been a constant process of Jesus revealing the idols in Mineo’s heart and God has been working through this to make His name known and to bring others to Jesus.

“The music comes out of what I experience, the things I go through. You can preach at people ‘You need to be obedient!’ and it is true, you need to be obedient to God. But I have found that admitting my brokenness allows others to see that they are not the only one. This is not to give sin unnecessary attention. By others seeing and hearing that my disobedient heart is being changed because I still follow Jesus, it shows them they are not disqualified. They, too, can still follow Jesus.”

Mineo recognized that, ultimately, the purpose of his music is to preach Christ and call others to be His disciples. “I hope my music can inspire those who listen and point them to the person who has inspired me and changed my life. I hope I can point to Jesus.”

In the midst of his church taking root (they will celebrate their one-year anniversary in January) and his music spreading (his next album is due to drop in April), Mineo was amazed to be invited to continue his on-going story by preaching with his lyrics and music at Urbana 12. “I was excited at the opportunity to give back to something that gave so much to me,” said Mineo with a smile.

Since our Lord’s invitation is a continuous call, Christ has met him at Urbana 12. “Jesus has met me and brought up the reality of the cost of discipleship. It is a call to a more radical obedience. My Christianity is comfortable and Jesus does not want it to stay there.”

“The invitation to follow Jesus is unlike any other. You accept most invitations in order to receive something shortly after, but with Jesus’ invitation we know that what we will receive is to come as we follow Him.”

More about Andy Mineo and his music. His album “Never Land” is available at reachrecords.com or through the iTunes Store.